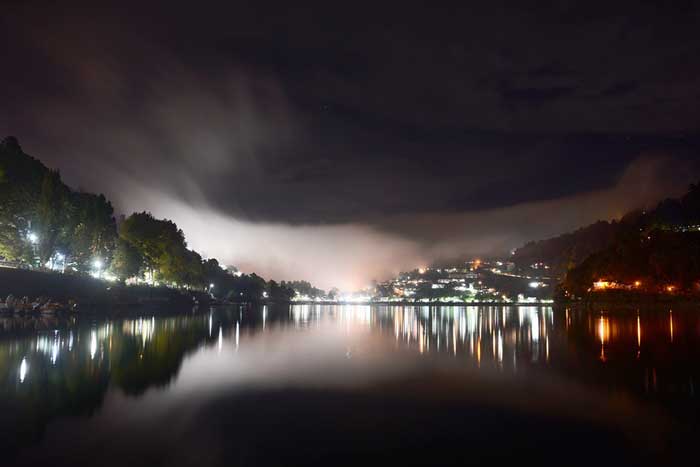 Known as the 'Lake District of India', Nainital is the largest town in Kumaon, Uttarakhand. Deriving its name from the Naini Lake, which is one of the 64 Shakti Peethas of the Hindus, Nainital is blessed with biodiversity and idyllic location.The town has been a part of several ancient legends and myths and is known to be one of the most popular tourist destinations in North India. This is why tourism plays a significant role in contributing to the economy of the city. There are many places of visit for the tourists in Nainital It is the most popular tourist place in the city as it is after this lake that the city earned its name. The northern portion of the Lake is known as Mallital and the southern portion is called Tallital. It is a beautiful place where you can stroll and savour the scenic beauty of the lake and the lush green surrounding. You can also go for boating. Hire a paddleboat, rowboat or yacht and indulge amidst the tranquillity and quietude of the environs.

The road passes through forests where occasionally wild animals can also be seen. "Naini" is derived from the temple of goddess Naini which was built on the bank of the lake but later got destroyed due to land slides in the year 1880, The place is mentioned in Skand Puran as 'Trishul Sarover'. Tri Rishi (three sages Atri, Pulastiya and Pulha) had come there for pilgrimage while they were at Gagar range (now called China Peak), they felt thirsty and could not find any water. Thereafter, they thought of Man Sarover and dug a hole which at once got filled with water.

The lake then formed was called Tri-Rishi Tal (The lake of three sages). Today it has an impressive lake surrounded by the hills from three sides with highest peak Cheena (2610 m) and the valley in between running from east to west. The lake is a little more than 3 kms in circumference. Nainital remains packed from April to November with tourist for sight seeing as well as for seeking escape from the heat of the plains. Naini lake has facilities for boating and yatching. Facilities for horse riding, skating, golf and rock climbing are also available for the visitors. Fishing is also permitted with the permission of local authorities. Talli Tal and Malli Tal are the two main trading centre at Nainital

Commonly known as the "Lake District of India", Nainital is one of the most beautiful hill stations in North India. Surrounded by mountains on three sides Nainital is located around the beautiful lake Naini Tal. This lake is situated at a height of 1,938 meters. There are many legends associated with the place. According to one, Nainital has derived its name from the Goddess Naina while the other legend says that when the Goddess Sati lost her eyes, she was being carried by Lord Shi

The best time to visit Nainital is between the months of March to June. The climate remains pleasant during these months offering tourists the best holiday experience.

One who is inquiring about how to reach Nainital has also option of flight. The nearest Domestic Airport from Nainital is Pantnagar Airport, Pantnagar, roughly 58 km drive from the city.

Would love to stay in van niwas nainital